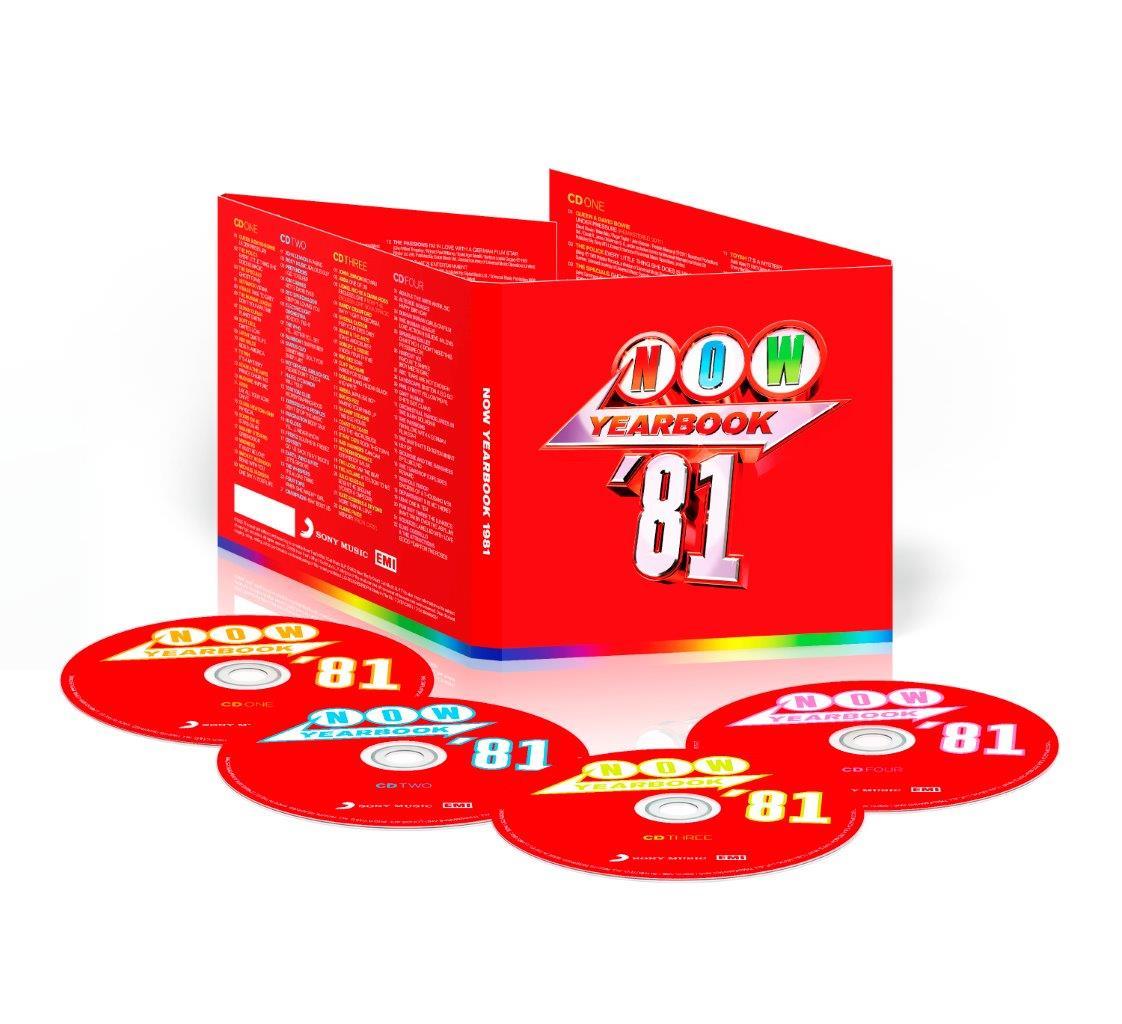 NOW Music is proud to present the newest addition to the ‘Yearbook’ series: NOW – Yearbook 1981. 4 CDs of 85 tracks that defined the charts in 1981. This special edition CD is housed in ‘hard-back book’ packaging, including a 28-page booklet with a summary of the year, a track-by-track guide, a quiz, and original singles artwork, and as a standard 4-CD package.

Kicking off with legendary No. 1s from Queen and David Bowie (‘Under Pressure’), The Police (‘Every Little Thing She Does Is Magic’), and The Specials (‘Ghost Town’), disc 1 is packed with classics that represent the influx of new artists that dominated the year, and would set the pop and fashion agenda for the next few years… with songs which sound as fresh and vital today as they did in 1981, from Ultravox, Visage, Duran Duran, Japan, the No. 1 ‘Tainted Love’ from Soft Cell, and the year’s biggest selling single (and Xmas No. 1) ‘Don’t You Want Me’ from The Human League. Adam & The Ants make three appearances on this Yearbook and actually had 5 huge hits this year, Toyah and Kim Wilde made huge chart debuts with ‘It’s A Mystery’ and ‘Kids In America’, and chart regulars Blondie, ABBA and Olivia Newton-John enjoyed continued success with massive singles. Shakin’ Stevens had two No. 1’s (both present here), and Madness produced a classic cover of ‘It Must Be Love’. Disc One closes with two more No. 1’s from soul legends Smokey Robinson with ‘Being With You’ and Michael Jackson, who enjoyed his first UK No. 1 with ‘One Day In Your Life’ a re-discovered track from his Motown recordings.

Disc 2 opens with ‘Imagine’ – a No. 1 nearly 10 years after it was first released, in the wake of John Lennon’s tragic death at the end of 1980. Huge ballads from Roxy Music, Pretenders, and REO Speedwagon are featured along-side the biggest selling track of the year in the U.S. from Kim Carnes with ‘Bette Davis Eyes’. Rock is well represented by Status Quo, Rainbow, The Who, Electric Light Orchestra, and the great collaboration ‘Please Don’t Touch’ between Motorhead and Girlschool. Dance music was a huge presence on the charts of 1981 as a new ‘80’s disco’ sound emerged and included hits featured here from Freeez, Imagination, Hi-Gloss, Yarbrough & Peoples, and Tom Tom Club, as well as continued smashes for established dance artists Earth, Wind & Fire, Odyssey and a big hit for 60s legends, Four Tops.

Yearbooks are all about celebrating the mix of chart hits there were in the year – and Disc 3 presents a sublime mix of ballads, pure pop, rock n roll revivalism, party floor-fillers, and easy listening. John Lennon once again leads the disc with his No. 1 ‘Woman’ taken from his most recent album with Yoko Ono ‘Double Fantasy’. ABBA’s ‘One Of Us’, Randy Crawford’s ‘Rainy Night In Georgia’ and the superstar partnership of Diana Ross and Lionel Richie on ‘Endless Love’ are all defining love songs – and led by ‘Stand And Deliver’ by Adam & The Ants begins a run of pure-pop classics from Kiki Dee, Cliff Richard, Dollar, and No. 1’s from Aneka with ‘Japanese Boy’ and 1981’s Eurovision winners Bucks Fizz with ‘Making Your Mind Up’. Rock n roll enjoyed a revival and Shakin’ Stevens’ ‘This Ole House’ topped the chart, with Stray Cats and Coast To Coast also enjoying big hits. Bad Manners’ take on ‘Can Can’ was a party classic, as were hits from Modern Romance and The Look. Easy listening pop also enjoyed a great year, Kate Robbins & Beyond had a big hit with ‘More Than In Love’, Elaine Paige had a smash with ‘Memory’ from the musical ‘Cats’ and Julio Iglesias had a No. 1 with ‘Begin The Beguine (Volver A Empezar)’.

The final disc in this collection features more new artists who saw their first chart success in 1981 including Haircut 100, ABC, Altered Images, Landscape, The Teardrop Explodes, Fun Boy Three, and U2 who made their debut with ‘Fire’, plus more artists who continued to build their chart careers, including The Jam, Orchestral Manoeuvres In The Dark, Siouxsie And The Banshees, UB40, Gary Numan, Squeeze and closing with Elvis Costello & The Attractions with ‘Good Year For The Roses’.

It was a watershed year for pop with new British artists emerging from the ashes of punk and disco by way of the New Romantic movement, and Disc 4 also includes second tracks on this collection from Duran Duran and The Human League alongside Spandau Ballet who would all go on to achieve huge success worldwide in the following few years.